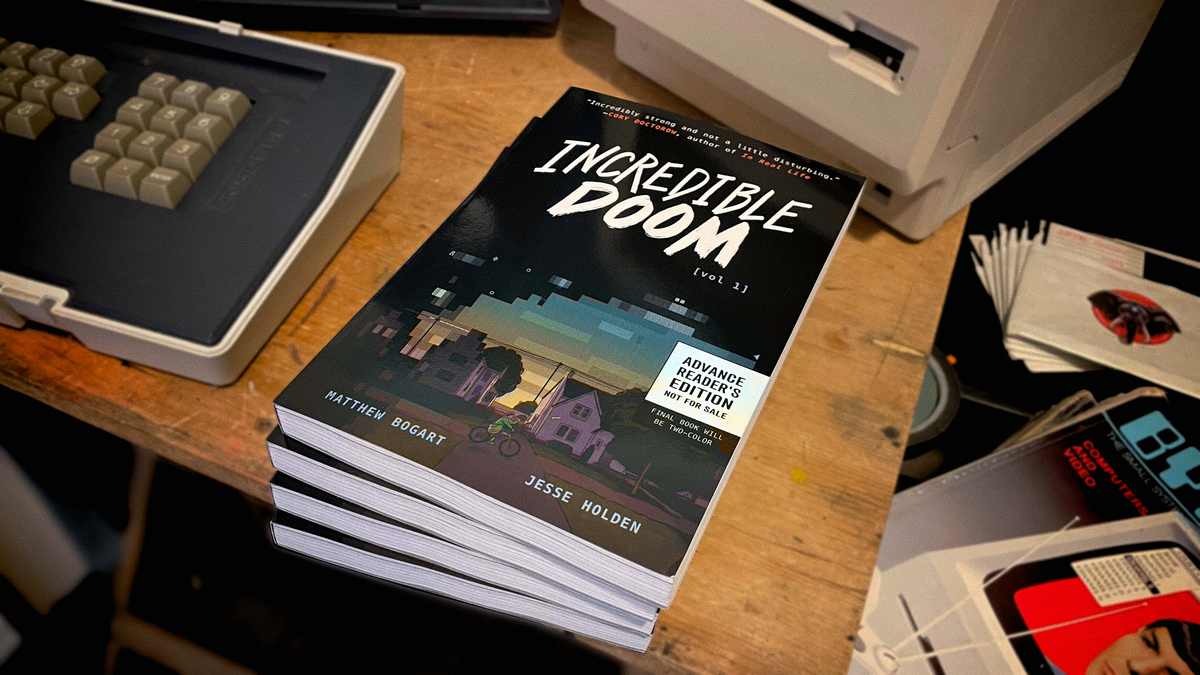 Now that it’s up for preorder about everywhere, I so excited to share the packaging and pre-order links for the upcoming collection of Incredible Doom!

There are all kinds of cool things hidden in these images, so let’s get into it!

First, the front cover of the paperback!

It’s got a very nice quote, lifted from a piece Cory Doctorow wrote about us in Boing Boing a while back. (That he kindly gave us permission to use here.)

We tried to show a neighborhood transforming into ANSI art. A tip of the hat to the amazing ANSI art scene that continues to this day! I learned to use the ANSI art editor Moebius for this piece and it was so much fun. I’ll share some process posts later.

Next: The paperback back cover:

That mouse with a book as a mousepad sure takes me back. Also, the word “Force” on the cassette tape is a reference to the comic book “company” me and my friends started as middle schoolers in 90s. We’ve had a great experience being published by Harper Alley but I’ll always consider Incredible Doom a Force comic.

THE MANY SECRETS OF THE HARDCOVER

As excited as we are for the paperback, I am absolutely in love with the design of the hardback. Not only is it sturdier, and should look even better on your shelf, but there are secrets exclusive to it.

There is an alternate cover hidden under the dust jacket!

And it wraps around to the back cover!

I love this illustration so much. Not only is it eery and strange, but it evokes what a bombshell these connected computers were to these kids. Also, seeing only a few computers in the neighborhood reminds me of when connecting to a network usually meant something local. When it required using the phone line, and long distance calls were so expensive. You were often communicating with folks who were just over the horizon, if not at the end of the block.

The dust jacket for the hardback has some secrets too. First, the back cover pulls forward these amazing quotes. (which are on the inside front cover of the paperback)

The jacket has an extended version front cover illustration on the inside front flap, our author portraits made in ASCII on the inside back flap, and a secret, tiny bit of cannon altering art hidden away under our portraits.

On the back flap you’ll see the Dissapointments’ cassette that Tina gives Richard the first day he comes to Evol House.

Some of you might recognize the text on the tape:

“HOME TAPING IS KILLING RECORD INDUSTRY PROFITS. WE LEFT THIS SIDE BLANK SO YOU CAN HELP.”

I love this line. It encapsulates the spirit of Evol House so well. A few bands have put this on cassettes over the years, but it was originated by Dead Kennedys. Although The Disappointments wouldn’t have any qualms about using it, we felt weird about it without permission.

SO! In a bizarre turn of events, with the help of Jesses brother, we found ourselves corresponding with Jello Biafra, the original frontman of Dead Kennedys!

Not only did he give us permission to use the line, but he suggested that The Dissapointments should be on his record label. So now there’s a little tiny Alternative Tentacles logo on the cassette. And it’s cannon that both Dead Kennedys and The Disappointments share a label.

We’re so excited for folks to get these books in their hands.

It’s coming out on May 11th. Tell your local bookstore to order you a copy and / or pre-order one for yourself. It makes a great gift! 😉

And please, if anyone you know might like it, spreading the word about the collection helps us out a lot. This is my first book through a major publisher and I would very much like them to be happy that they took the chance on us.

Thank you everybody! You all are the best!

Richard at a bus stop

Patreon Podcast #2- A Year of Preparing

Incredible Doom: Eternal September #1, the first issue in Season 2,  is up for all patrons today, months...