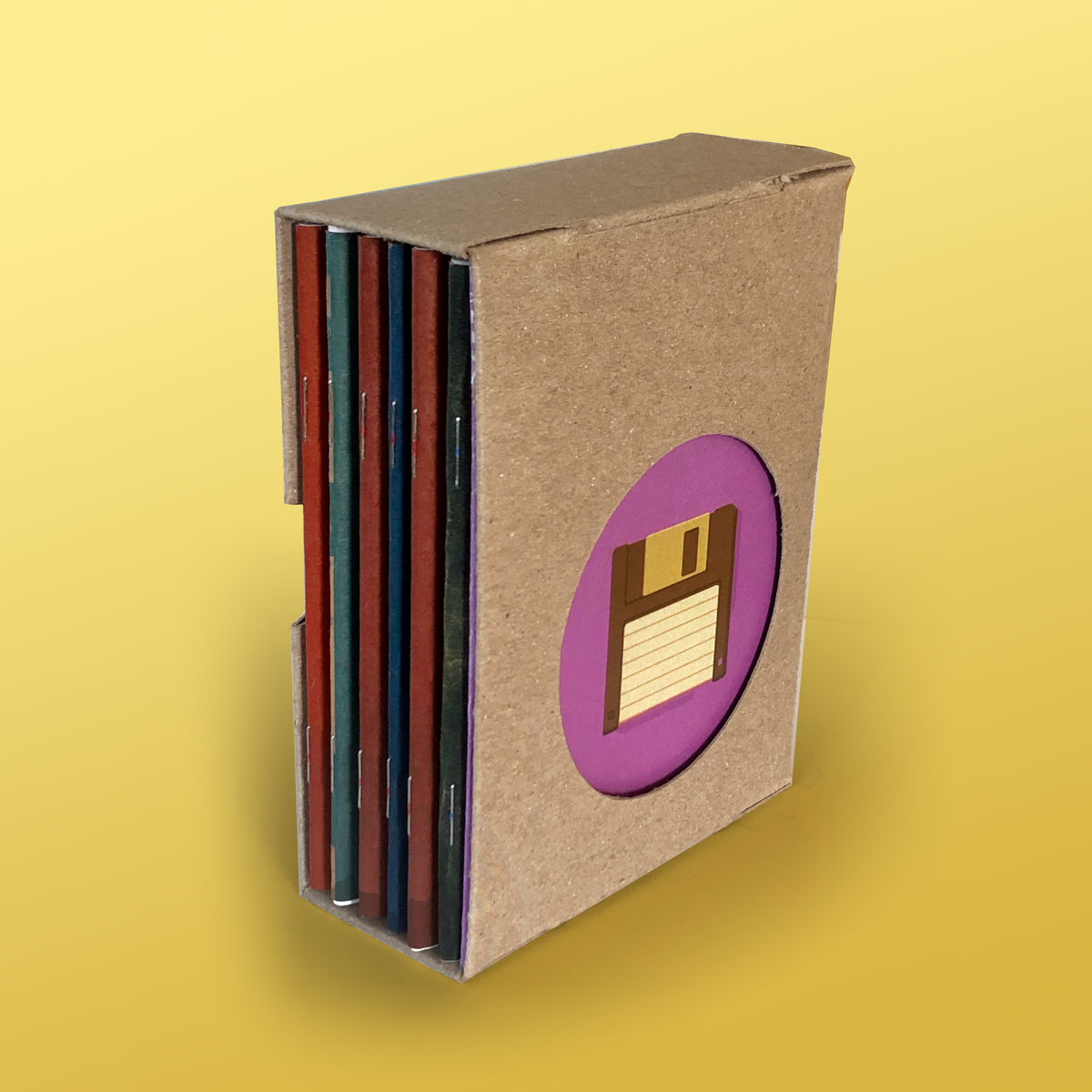 About the Incredible Doom Slipcase

After my last comic ended, I made a list of everything I’d always wanted to do in comics but hadn’t. Inspired by Oregon History Comics by Sarah Mirk and Monster Box by Tien Pham & Lark Pien, making a series of pocket-sized books in a cardboard slipcase was at the top of the list.

Now, years later, it’s done. Incredible Doom, my and Jesse Holdens comic about teens in the 90s making bad decisions over the early internet,  was designed from the start with a slipcase in mind. It’s finally here, and it’s a beauty.

The case holds Season 1 (issues 1-6), each feelie, and the rarities issue, Incredible Doom #0.

It also has several hidden features. The hole in the front frames the cover illustrations for each issue perfectly, so you can choose what cover you like best, but we’ve also included an insert with six new illustrations to choose from. Jesse designed a special wedge shape inside the case that keeps whichever image you choose pressed against the window.

Like each of the comics that inspired it, you can tell this is hand assembled, not by someone in a factory, but someone who cares about the project. That’s part of the reason these slipcases ship flat, to be folded at home.

I think these boxes are amazing, the completion of a decade long dream. I hope it helps Incredible Doom find a place on your shelf for years to come.

If you’d like one, head over to Patreon and become a member. You also get discounts on buying the previous issues to complete your set. None of which would have been possible without the support of my patrons. Thank you so much for your support.

Now for the nitty-gritty details…

It’s not hyperbole to say this wouldn’t exist without our patrons. To explain why, and help others who want to try something like this, I broke down how we made it, what it cost, and what when wrong. (There was a lot.)

We hired the fantastically patient Kristin Walker at Twin Ravens Press, recommended by Lucy Bellwood, to laser cut the slipcase and fold lines. They did a wonderful job.

I bought the card-stock for the inserts at Kelly Paper and biked it over to Portlands Independent Publishing Resource Center. I printed them on their color laser printer, cut them 15 at a time on their stack cutter, and scored each by hand using their scoring machine, so they would fold with a nice crease.

I ordered 200 photo mailers to ship things in, and a DYMO Label Writer 4XL printer to print the postage. On our friend Andys recommendation, I subscribed to Endicia to generate the postage.  I used the least expensive shipping option.

I love where this ended up, but it’s been a bumpy ride getting here. To show both that none of this is easy, and no step is so hard that you couldn’t do it, here’s everything that went wrong. Buckle up.

We thought we were so prepared. Before we even launched the website, let alone wrote and drew the six comics that would go inside it, I made a mockup of the case out of paper.

Considering I’d done nothing like it before, it worked wonderfully.

Meanwhile, our friend Josh Millard was making very creative use of his Cricut machine, a device normally used by crafters and scrap bookers to cut shapes out of paper. So we asked Josh to see if he could cut our mockup into our chosen stock. I was giddy at the results.

We thought we’d found an inexpensive way to manufacture any number of slipcases. Which was important, as we didn’t know if we’d need 10 or 1,000 once it came time.

We put the design away and started drawing the series, never mentioning our plans for a slipcase online. Although we teased our plans with a photoshopped image made from pictures of our Cricut mockup.

A quick few years later, we announced our plans to the public. We’d finished writing and drawing all six issues that were to go into the case and had tested production. It should be fine.

We urged folks to subscribe to the Patreon, and in a matter of weeks, they’d receive a slipcase in the mail.

I bought a stack of chipboard and lugged it over it to  Jesse’s house, who had purchased his own Cricut. We tweaked the design from years back, and he started cutting.

It went horribly. The failure rate was so high on the thick board that Jesse would work for hours and not get a single usable slipcase. It turns out the tests that made us so confident years ago were luck.

We were stumped. We thought we had been so prepared. We asked for a quote from Twin Ravens Press, but it was five times what we’d planned.

I’d now promised these to patrons. Folks had signed up with the expectation of getting these. We had to deliver something. So Jesse went back to the Cricut machine.

He diligently fed in sheet after sheet, eking out occasional moderate successes between failure after failure. The machine would jam on irregularities in the stock, the board would tear when you pulled it off the adhesive sled.  Even those that were counted as successes required a good deal of cleanup by hand with an X-Acto knife.

We were falling so far behind. It felt horrible.  I hate breaking promises to patrons. But, in the end, it was actually the delays that saved us.

After months of failed attempts, the accumulated monthly income from patrons built up. I had enough in the bank that I could tell Twin Ravens Press to manufacture them for us.

The problem was finally out of our hands. The professionals were taking care of it. What a relief.

Then I got the proof in the mail and it fell apart in my hands.

This was an easy, yet time consuming fix. A few weeks waiting for a new proof, quickly approved, another few weeks, and I had a stack of beautifully cut slipcases on my kitchen counter.

Printing the insert presented its own challenges.

I struck out at two different copy shops. The first because they thought I was printing copyrighted images. The second took two weeks to tell me that a quote couldn’t be done for another week because they were too busy.

So I took the file to the IPRC to print myself. I had to do a few tweaks to the design because of limitations of laser printers. Namely, they can’t guarantee exactly where a print will land on a page. It shifts by a fraction of an inch with every print, making folding on the line on both sides impossible.

Finally, the issues with the shipping.

Shipping previous rewards had become a huge time sink, and I was determined to simplify the process for the slipcase.

The first failed solution was trying to pay others to do it for me. I reached out to folks who do fulfillment for Kickstarter projects. They charged more than made sense for the way I price my Patreon.

I noticed BackerKit was trying to help Patreon creators fulfill their rewards, so I sent them an email. Both Kayla and Maxwell at BackerKit were extremely helpful, even trying to set things up for me on their end. But we were so far behind schedule, and the BackerKit process would tack on weeks more.

So I searched for ways to print postage at home and landed on Endicia. Although it took three trips to the post office, two to ask if I’d generated the labels correctly (I hadn’t), and one to send everything out, it seems the shipping worked. (as of this writing at least) The slipcases … are finally … in backers hands.

I’M TEMPTED TO SAY THAT EVERYTHING WENT WRONG

But it didn’t. We’ve made an awesome slipcase that holds years worth of comics to be enjoyed over and over.

It’s great. We all made it together.

This went so right.

Jesse & I were on “Talking To Ghosts” 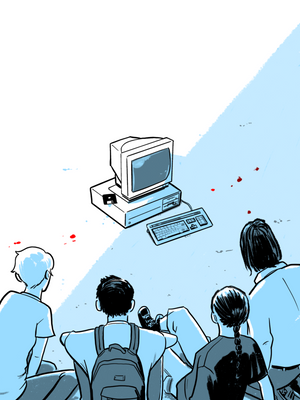 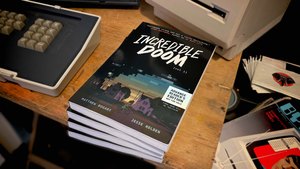